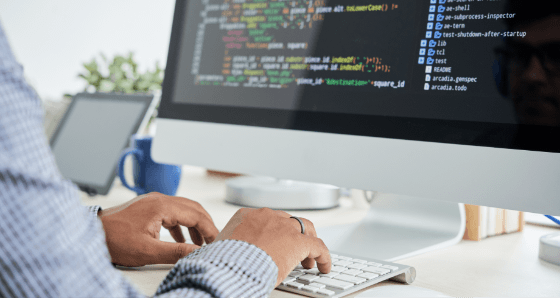 The most popular programming languages in 2022

JavaScript has reigned undivided for a decade among the most popular programming languages. Check out what technologies programmers use most often. You'll learn most of them at Coders Lab IT academy.

Stackoverflow, the largest online community of programmers, publishes annual research papers based on surveys conducted among its members. One of the questions is about which programming languages coders use most often in their daily work. Here are the results of this year's survey.

In 2022, JavaScript took the top step of the podium for the 10th consecutive year. It is used by more than 65% of respondents. The second place (55.08%) was taken by the HTML markup language supported by CSS.

JavaScript owes its popularity to the fact that it can be used for almost anything in terms of coding. Primarily used in the front end, it is a "must know" for web programming. Among programming jobs, the most significant number of announcements are aimed at JavaScript specialists.

JavaScript is for people who like to see results of their work quickly and those who like to keep learning. Front-end technologies change quickly, so people who want to start programming in JavaScript must keep up with these changes. However, it is an easy language to learn to program, as you only need a notepad and a browser to write code. In addition, JavaScript will be suitable for people with logical thinking, aesthetic sense, and attention to detail.

SQL language owes its popularity to its simplicity and broad applicability. Nearly half of those surveyed by Stackoverflow admit to using it. SQL is used in various industries, such as banking, commerce, insurance, telecommunications, healthcare, and education. SQL specialists are currently in high demand on the market.

The SQL course at Coders Lab was created for people working with extensive collections of the information who want to expand their analytical skills and increase productivity. During the training, you will learn additional methods of formatting the output dataset and manipulating records in the database. You will also create effective and extensive queries in SQL, rules of operation with relational databases, and group and analyze the obtained data.

Python ranked fourth in the list, with a score of 48.07%. It is a straightforward language to learn from scratch. Writing a program in Python will also require less time from you than in other languages such as C++ or Java. This will allow you to spend time on fundamental research instead of having to review the documentation before you reach your actual destination. In short, you will focus on your primary research goal, not your tool.

One of the main factors that make Python so popular is its versatility. You can use it not only for research but also for creating websites, text processing, artificial intelligence, machine learning, and more. Many programmers fall in love with Python because it helps increase productivity. This means being immediately productive, which helps with initial exploratory data analysis.

Java is among the most popular technologies (33.27%), according to Stackoverflow users. Java was "born" 25 years ago with the idea that any program written in it would run on various devices: phone, TV, payment terminal, medical device, or car. Write once, run everywhere! Using Java, you can create a single application that runs on any platform, be it Windows, Mac, or Linux. The fact that Java runs on any server and operating system makes it one of the most significant advantages that any programmer will appreciate. Thus, Java programming will allow you to create a wide range of projects with global reach and diversity, whether desktop, web, or mobile applications. Compared to other classical programming languages, such as C or C++, Java is much easier to learn. It is a type of object-oriented programming, and understanding the essential aspects of this type of programming will make assimilating Java technology intuitive.

You can learn all the languages mentioned above at Coders Lab. Our courses allow people with no prior IT skills or experience to get an education. Coders Lab students can choose between the daily and weekend learning modes. They also have both classroom and online courses available. Thanks to the intensive bootcamp learning method, professional conversion is possible after just 2-3 months of study! More than 8,000 students from Poland, Romania, Spain, and Indonesia have graduated from our school. Coders Lab also offers B2B courses and a franchise program, so you can open your own IT academy and run coding courses on your own.